I was lucky enough to spend Christmas to New Year’s on the island of St. Marteen (also known as St. Martin) in the Caribbean in 2015.  It was a quick getaway with a good friend – sun, beach, plenty of food, and some fun day trips and excursions!

We stayed at the Sonesta Great Bay all-inclusive beach resort.  St. Martin is divided in to two sides – the Dutch and the French side.  We were on the Dutch side and in the bay where all of the large cruise ships doc which made for interesting views and people watching.

I have stayed at other all-inclusives but never the Sonesta brand.  It was a nice enough hotel, relatively good food, and plenty of  beverages available.  They also attempted to have various games at the pool daily and different themed dinners and events at night.  Sonesta Great Bay

We stayed in a garden room that faced the street (and did not include alcohol in the minibar but you could stock up downstairs and bring back to your room) and the mountain.  It was an ok view, we were really just trying to stay in the lowest level room since traveling over the holidays is at the height of tourist season (and the most expensive time).

The highlights were the white sandy beach and clear blue water and also the hotel staff.  I saw a few different signs around the island that stated St. Martin was the friendliest Caribbean island and I must say I cannot disagree.

We had read about Friar’s Bay Beach and Happy Bay beach which is a beach you can hike to (cannot get there by car) from Friar’s Bay on the French side.  It was a quick, easy walk and the beach was beautiful and secluded (yes, was nude beach optional).  There is a little hut there where you can buy drinks however we went on a Sunday and it was closed.  It was easy however to hike the 10 minutes back to Friar Beach and grab some drinks to go.

This is at sunset on our hike back from Happy Bay Beach. 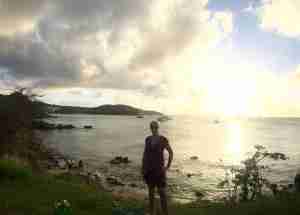 We also went on a day excursion to Prickly Pear Island on a large catamaran.  The island was absolutely spectacular, everything you think of when you think of the Caribbean.  It took about 2 hours getting there and appetizers and drinks were served both ways.  The crew was extremely friendly and entertaining.

There were two huts once on the island.  We chose to go to the furthest one and rent beach chairs and an umbrella, while keeping our bucket of beers continually stocked.  We hiked around the side of the island where it was more desolate and isolated and the views even more beautiful.

We booked with Blue Beard Charters. 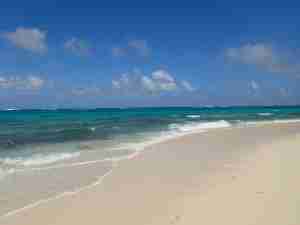 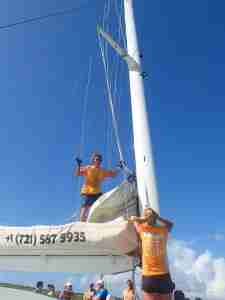 My favorite part of the trip was Maho Beach.  And yes, the photos below are real and no editing has been done!  I had read about this, seen photos and even seen this airport highlights on a TV show but none of that prepared me for how cool this actually was.

The sister hotel to Sonesta Great Bay is Sonesta Maho Hotel which is right by this flight pattern.  Since we were at the sister property we were able to go to Sonesta Maho Hotel and use their facilities as well as eat and drink all for free.  From the hotel we could see and hear the jets so after enjoying some time there we left and walked along the beach over to Maho Beach which is the beach the airplanes fly directly over.

We ended up at the Sunset Bar to the south of the beach which was quite festive and had inexpensive beers and food.  Despite being about 1 in the afternoon, the bar was packed and people were having a great time.  We enjoyed the company of some locals and visitors alike.

Now the cool part.  We happened to be there about 30 minutes before the huge KLM 747 was scheduled to land.  In addition to seeing it (think whale in the sky) we watched about 50 other private and commercial jets landing as well.  The noise, the smell of the jet engine fuel, and the drafts the engines created are hard to explain without experiencing it yourself.  Definitely worth a visit and if I am back in St. Martin one day I will make sure to spend some time at Maho Beach. 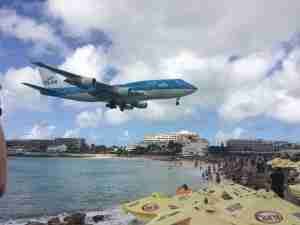 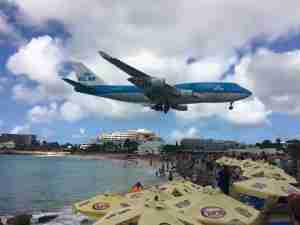 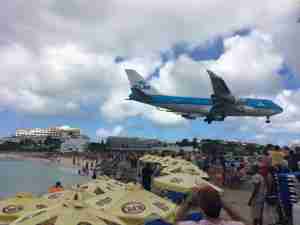 I had a great experience in St. Martin – the island was beautiful, the people were friendly, and there was a lot to do.  I hope to visit again soon but until then….. Cheers! 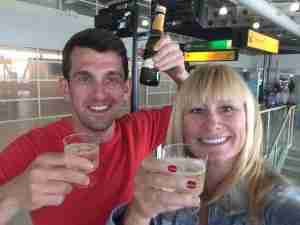